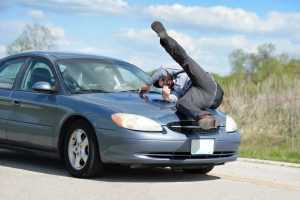 Pedestrian accidents are the final accident type targeted by insurance carriers for aggressive defense. Common sense tells us that it is typically easy to avoid being in the roadway or being struck by a vehicle. If the driver leaves the roadway, establishing legal liability is simple. However, if a pedestrian is crossing the roadway away from a marked crosswalk or if he or she is walking on the roadway with his or her back to traffic (violating statutory law), the insurance carrier will typically argue that the pedestrian was at least 1 percent at fault. Beyond the contributory negligence defense, they often also argue that the pedestrian “assumed the risk” of injury by placing him- or herself on or near the roadway. Remember that these are complete defenses in North Carolina and would result in a zero verdict following trial. Do not allow insurance adjusters to blame you if the driver was at fault. Contact pedestrian accidents attorney today.

Careful analysis of all North Carolina pedestrian safety statutes should be made in every case. Of key importance are the following laws:

These statutes and all statutes governing the driver and surrounding traffic should be considered in a pedestrian/auto collision. Also, practical analysis of the lighting conditions, color and shade of the pedestrian’s clothing, speed of the vehicle, braking effort of the driver, presence of all traffic controls and signs in the area, and all other facts surrounding the accident must be carefully considered in every case.

If the insurance carrier seeks to blame you for the pedestrian accident, you should consider application of the “last clear chance” doctrine. This doctrine stands as an exception to the contributory negligence defense and allows a negligent pedestrian to collect from the driver’s insurance carriers. The last clear chance doctrine has four elements:

Injuries in these cases are often severe, and thusthe fourth element is almost always present. Through careful investigation, reconstruction of the accident, and aggressive advocacy, a pedestrian who committed a slight error often can overcome the contributory negligence defense and still collect full payment for injury claims. However, it is essential to prove with certainty that the driver should have seen and avoided you.

Darting child cases are examples of pedestrian cases where the last clear chance doctrine would not apply. An example would be a case where a driver is proceeding at a safe speed when a child suddenly runs between two parked cars directly into the driver’s path. If the driver has no prior opportunity to notice the child and if the driver was maintaining a safe lookout and proper speed, this would be a case where the driver would not have a last clear chance to avoid the accident. In these cases, there would be no right to compensation for the injured pedestrian. Contact us today.